Hunter Fan Company officially released the Wi-Fi enabled, Signal ceiling fan for purchase. The Signal supports Apple HomeKit technology and seamlessly interacts with other HomeKit-enabled products to create a customized suite of comfort, security and energy efficiency.  After making their original debut at the 2016 Consumer Electronics Show (CES), the first Homekit-enabled fans from Hunter received recognition and buzz among the top tech news sites including a CES 2016 Editor’s Choice Award by Reviewed.com/USAToday.

The Signal is just the beginning of Hunter Fan’s 2016 new product launch – over 200 new fans – celebrating Hunter’s 130th year of creating ceiling fans. From rustic to contemporary designs, this new product line was crafted with both design-focused and technology-savvy consumers in mind. With the official release of the Signal, and the upcoming Fall release of the Symphony, consumers can now easily incorporate smart home technology into their everyday lives. 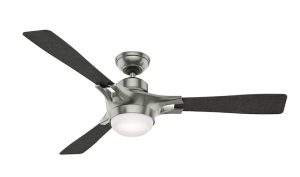 “This new product launch is a testament to our dedication to unmatched quality and performance and determination to bring our customers the latest designs and technology at an affordable price,” said John Alexander, CEO. “We are thrilled to finally share this new innovation with our eager customers and are hoping to see a Hunter Fan in every home.”

Apple HomeKit technology allows users to securely control each fan – or a group of fans – from one place using the new iOS 10 Home app or Siri on their iPhone, iPad, or Apple Watch. Users can set up HomeKit-enabled products to work together based on triggers, such as having the fan’s light turn on the moment the fire alarm detects smoke or creating a scene that automatically turns on the fan’s light and locks your front door simultaneously. HomeKit technology provides advanced security with end-to-end encryption and authentication between the fan and the iOS device.

The 54” wide Signal retails at $379 and provides another opportunity to connect a device into your overall smart home scheme.

Home Decor at its Best – Who is the Designer?